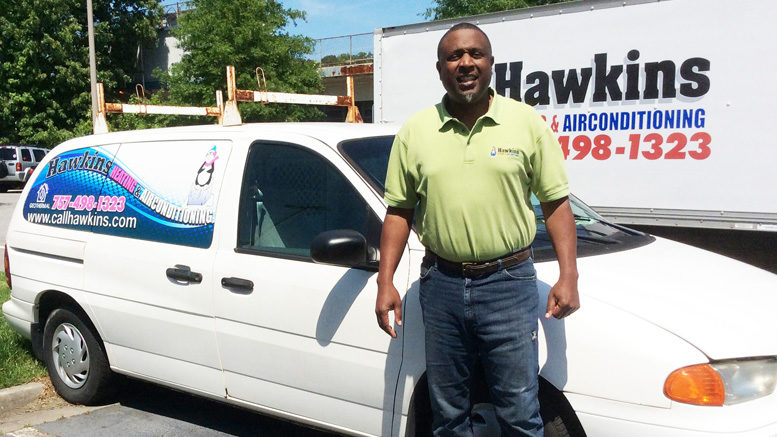 Born and raised here in Hampton Roads, Eric Hawkins grew up on a farm, raising hogs, planting produce, welding, cutting and building stuff. He learned early on how to do repairs on the farm equipment. Eric and his father realized he was pretty good at working with his hands and troubleshooting equipment issues. Eric mentioned he often watched the HVAC guys that came on the farm to work on their equipment. One particular time, the technician was there to work on a boiler and after examining it, told Eric’s father they needed a new boiler. Eric went to his father and said that the technician left out a step in his process, and he would like the chance to troubleshoot the boiler. His father gave his approval, and Eric went to work. He found the problem which was just a need for some good cleaning, and the boiler started right up, much to his father’s surprise. Eric was only 15 years old at the time.

Skipping ahead a few years, Eric started Hawkins Heating and Air Conditioning in 1997.  Now, with 5 trucks on the road, Hawkins is licensed and a certified Virginia Class A Contractor, a licensed/certified Master Gas Fitter and Licensed Master HVAC Contractor.  The company is A+ rated with the Better Business Bureau, and a 2016 Angie’s List recipient of the Super Service Award, with numerous reviews and accolades.

When asked what makes your company unique, Eric responded without hesitation, “If we can’t make you say “Wow” we haven’t done our job.  Also, we offer a flat rate price, we don’t charge by the hour as most HVAC companies do, and I think that really sets us apart.”

Eric has hired several ATI graduates and said, “I like ATI students because you not only get them trained but give them confidence. That’s important. I don’t have to take them from ground zero. It takes a lot of the work off of me with new hires.” He went on to say, “I am pretty happy with ATI graduates. As I expand, I plan to continue working with Jean Davis in the Career Services Department.”