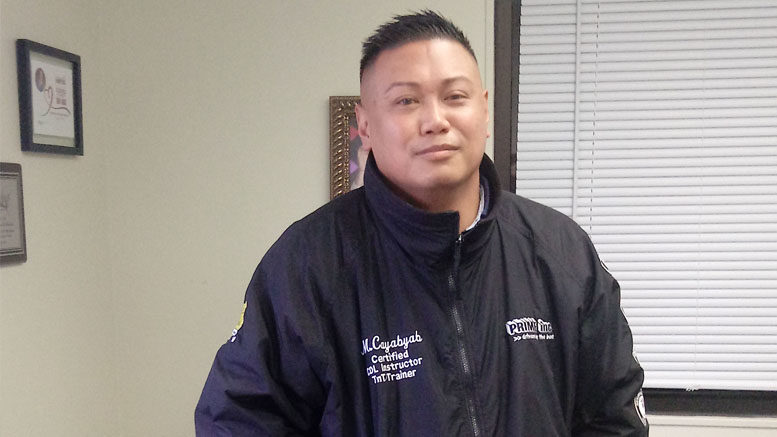 Recently, Mark Soriano stopped by ATI to visit with Tammy Potter, the admissions advisor that helped him start his education in commercial driving. He graduated in 2010, received his class A CDL, and it has been steady growth for him ever since.

Mark has been an owner-operator driving for Prime, Inc., since he graduated from ATI. When asked what piqued his interest in becoming a truck driver he said, “I got to travel with my former wife’s grandfather through 15 states. He had been driving a tractor trailer as an owner-operator for over 30 years. Soon after returning from a trip, I saw a commercial on TV for ATI’s Truck Driving program, I enrolled, and the rest is history. I purchased my own truck and my future plans are to eventually have my own company with six or seven trucks on the road.”

Mark is not only an over-the-road driver, but also is a trainer for Prime. If a new employee has graduated from a private school like ATI, the training is fewer hours than for someone that didn’t attend school before being hired.

I knew the answer before I asked Mark what he liked about driving, and his answer was without hesitation. “I love being able to see the country and the freedom, and the money isn’t bad either,” he chuckled. “I don’t even have to use my GPS anymore, I know the country.” When you have so many family members that are truckers, how could you possibly do anything else?  Mike Monserud’s cousins, uncles and his father are drivers so he had many opportunities as a young boy to take rides in the big rigs. His uncle told him “Never stop learning boy, every day is different, and the day you stop learning is the day you stop driving.”

Mike started working at TMC in Des Moines, Iowa in August 2017, and he said, “When I was in orientation at TMC, I listened to the stories from the other guys about what they didn’t learn at the truck driving schools they came from. I was grateful for the good training I received from ATI. So I had an edge from the beginning.”

Mike drove for TMC for a short while before becoming an instructor.  When asked what he liked about instructing, he said, “I am able to pass on knowledge and make sure these guys are trained like they need to be. I enjoy that, so I am here for the long haul.”

Mike is originally from Northeast, Iowa and is living in Des Moines with his wife, three children, two cats, and a big rig.